A sign of the (L.A.) Times: Fore more years of Trump? Rick Reilly would be lying if he said he wanted that, for golf’s sake

Rick Reilly’s course of action isn’t to cheat the audience.
The former L.A. Times, Sports Illustrated and ESPN writer sized up the room of about 30 bunched into the center of an independent book store in Manhattan Beach the other night and declared: As a golfer, your president is all about unplayable lies.
“If he’s making America great, he’s made golf gross,” Reilly exclaimed.
It’s all there on the cover of the book Reilly is promoting — “Commander In Cheat: How Golf Explains Trump” (Hachette Books, $28, 244 pages), hacking its way up all sorts of bestseller lists.
Drawing upon his journalistic DNA, Reilly dedicated this book to “the truth … it’s still a thing.” In his acknowledgements, he thanks “every reporter out there who keeps pursuing the truth head-first into the worst hurricane of lies, insults and Constitution-trampling I’ve ever seen in my 40 years in the business. You inspire me.”
More at the L.A. Times website linked here.

Also:
= Excerpts from the book in Esquire magazine.
= Reilly’s piece about the book for The Atlantic
= Reilly on CNN via RealClearPolitics.com

Up in smoke: The dos, don’ts and more doobie etiquette on #420Day (pay attention kids)

You do your best as your parent. You try to keep your kids safe and smart… and then they grow up and pay you back by laughing at your laughable attempts at smoking a joint when all you were trying to do is get into their world. Oh, the kids and their weeds.

Fortunately, I had access to the wonderful Mskindness Ramirez, a cannabis advocate and educator, who’s made a name and reputation by talking about the subject and substance without “demonizing or glamorizing.”

I sat down with her, and my daughter Madison, and she showed us how to roll, safely light and efficiently smoke a joint. We also found out that she thinks Nickelback is just horrible, so you know she’s all right.

Watch the exclusive video at LBPost.com.

Need a sports angle to this fine Saturday? Mike Tyson is lit:

happy 420 everyone! who else is enjoying the day with some @tysonranch pic.twitter.com/Qd9lN6w09C

A fast and furious Long Beach weekend: Fast cars, pocketing food and the best college volleyball one could desire

The rich are different. They get to do stuff.

I, who am not rich — a fact made clear as I finished doing my taxes this weekend; my initial relief at getting to skip multiple steps soon tempered by the realization that all of those steps were related to the making or having or saving or investing of money — was invited to one of those things that rich people love to do: throw parties before, during and after sporting events for the purposes of community/fun/ongoing business relationships. END_OF_DOCUMENT_TOKEN_TO_BE_REPLACED

A SIGN OF THE (L.A.) TIMES: DOUG GLANVILLE, AND THE JACKIE ROBINSON EXPERIENCE

Imagine what Jackie Robinson could have accomplished in his messaging with modern-day media platforms.
“It would have been amazing,” Doug Glanville says. “He was a prolific letter writer to start with — but he really was viral before there was viral, even with just the traditional media outlets covering him.”The 48-year-old former MLB outfielder in his latest role at ESPN considers himself to be a media multitasker, thanks to his “crash course in every way one can express ideas.” He’s also thankful to be back as part of the network’s litany of Jackie Robinson Day remembrances on Monday — including L.A. receiving the national coverage of the Dodgers-Reds contest at Dodger Stadium that will include Rachel Robinson and two of her children.
END_OF_DOCUMENT_TOKEN_TO_BE_REPLACED

Read into this: 30 baseball book reviews in the 30 days of April, ’19 comes with some revisionist history

By Tom Hoffarth
First off, behold a shelf of baseball books above from the magnificent Austin Public Library, on Cesar Chavez Blvd., right along the Colorado River in Austin, Tex.

We were there on business recently and did the tour of this famed book depository to see what it had stocked. Aside from the architectural beauty of it, there was a beauty of a baseball book collection on the sixth floor (learn your Dewey Decimal system, folks … or at least Google it).
Seriously, as cool as Austin is, the library is one of its best secrets.
So …
What’s old is often new in baseball’s annual rite of literary passage each spring. It’s never shy of more rewrites.
To get a clear read on why book publishers put on their straw hat and usher back Major League Baseball with dozens of new titles, note that all sorts of revisionist history, personality-driven essays or bios that exhume new previously untold info resonate best with those who’ve endured a long, cold winter. Same with anything that takes good-natured digs to keep America’s Pastime part of the pop culture conversation. 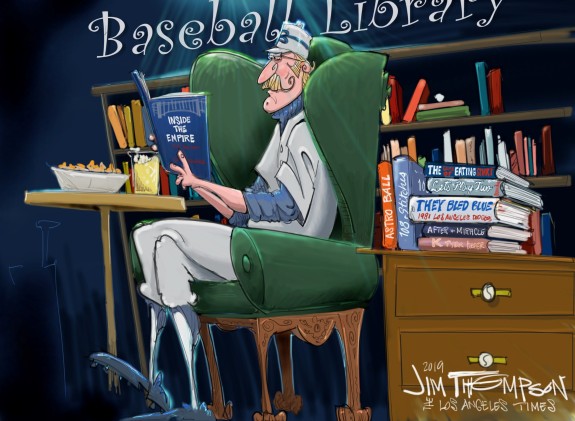 Our weekly L.A. Times sports media column starts off April 1 without trying to fool anyone: We’ve got some quick-hit reviews on more than a half-dozen new baseball books out this spring (and coming up).

During the entire month of April on FartherOffTheWall.com, we revive our annual baseball book review, one a day, and will update this post with the growing list.

Check out our entrance velocity: 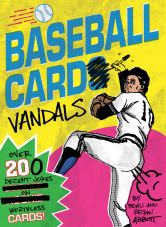 * April 7:  “Scouting And Scoring: How We Know What We Know About Baseball,” by Christopher J. Phillips
* April 8: “They Bled Blue: Fernandomania, Strike-Season Mayhem, and the Weirdest Championship Baseball Had Ever Seen: The 1981 Los Angeles Dodgers,” by Jason Turnbow (you’ll have to wait until June)
* April 9: “108 Stitches: Loose Threads, Ripping Yarns, and the Darndest Characters from My Time in the Game,” by Ron Darling, with Daniel Paisner 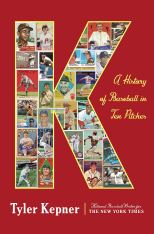 A break in between all this to get in some TV exposure via Spectrum News 1’s “L.A. Times Today” show with Lisa McRee:

* April 16: “The Untold Story: Fidel Castro and Baseball” by Peter C. Bjarkman and “Last Seasons in Havana: The Castro Revolution and the End of Professional Baseball in Cuba” by Cesar Brioso

* April 19: “Baseball Epic: Famous and Forgotten Lives of the Dead Ball Era” with words and pictures by Jason Novak
* April 20: “They Played The Game: Memories from 47 Major Leaguers” by Norman L. Macht
* April 21: “Ballpark: Baseball in the American City” by Paul Goldberger
* April 22: “Inside the Empire: The True Power Behind the New York Yankees” by Bob Klapish and Paul Solotaroff (along with “Chumps to Champs: How the Worst Teams in Yankees History Led to the ‘90s Dynasty,” by Bill Pennington; “Almost Yankees: The Summer of ’81 and the Greatest Baseball Team You’ve Never Heard Of,” by J. David Herman; “Mantle: The Best There Ever Was,” by Tony Castro; “My Dad, Yogi: A Memoir of Family and Baseball by Dale Berra; and “Doc, Donnie, the Kid, and Billy Brawl: How the 1985 Mets and Yankees Fought for New York’s Baseball Soul” by Chris Donnelly

* April 23: “Ten Innings at Wrigley: The Wildest Ballgame Ever, with Baseball on the Brink” by Kevin Cook

* April 24: “The Legendary Harry Caray: Baseball’s Greatest Salesman” by Don Zmida
* April 25: “They Said It Couldn’t Be Done: The ’69 Mets, New York City, and the Most Astounding Season in Baseball History” by Wayne Coffey; “After the Miracle: The Lasting Brotherhood of the ’69 Mets” by Art Shamsky with Erik Sherman; “Here’s the Catch: A Memoir of the Miracle Mets and More” by Ron Swoboda; “The Miracle of 1969: How the New York Mets Went from Lovable Losers to World Series Champions” by Coutinho Rich
* April 26: “Full Count: The Education of a Pitcher” by David Cone with Jack Curry
* April 27: “Left on Base in the Bush Leagues: Legends, Near Greats and Unknowns in the Minors” by Gaylon H. White
* April 28: “For the Good of the Game: The Inside story of the Surprising and Dramatic Transformation of Major League Baseball” by Bud Selig with Phil Rogers and “Play Hungry: The Making of a Baseball Player” by Pete Rose

* April 29: “When the Crowd Didn’t Roar: How Baseball’s Strangest Game Ever Gave a Broken City Hope” by Kevin Cowherd
* April 30: “Infinite Baseball: Notes from a Philosopher at the Ballpark” by Alva Noe