By Tom Hoffarth
Bryant Gumbel has banked enough professional equity and personal knowledge about the TV business to acknowledge that, even with the smallest trace of humor, he hesitates drawing any attention to the fact HBO’s “Real Sports” has already started its 25th season.
“The reality is HBO is considered a cutting-edge network,” said the “Real Sports” host and lead reporter as he drove to the premium channel’s New York studios Saturday morning to do voice-over work on a piece about two extreme athletes racing across Antarctica that will be part of Tuesday’s Episode No. 263.
“But there is a part of me that, I might want us to slip under the radar because someone might turn around and say, ‘Wait a minute, you’re not what we do now.’”
If HBO ever pulled the plug on this, there would be some investigative reporting done by someone to find out why. Let’s not even go there.
The weekly L.A. Times sports media piece has posted.
Here is a video clip of Tuesday’s episode Gumbel did with two extreme athletes who raced across Antarctica recently. Because they wanted to?

“It’s heartening, though worrisome, to see the some of the things people will do in the name of sports or competition,” Gumbel said. “These two guys, what they went through I wouldn’t put my worst enemy through. Truly. The idea trying to cross a continent on foot dragging everything you need for two months in 60- below weather, in howling winds, is just something that I can’t even imagine it. Yet these two independently decided to do it at the same time. What they went through is incredible.”

We also have some outtake Q&A responses worthy passing on:

Q: Are there typical timelines for stories you have done in the past? How did this one with the Antarctica racers compare to some others?
Gumbel: “I’ve had some things we worked on a year in advance, and others we basically did it the week of. It varies not only in terms of when the event happens and when they are available but when the story is ready and when it fits with our total lineup for that month.
“For this story, the one thing I didn’t realize — Antarctica has a summer that lasts only from November 3 to January 10, in that range. The rest of the time it is pitch black. So for their brief summer, it’s around-the-clock daylight, and the only opportunity to attempt something like this. They independently decided to do it this time, this year. One was trying to get into a record book, the other was trying to memorialize a friend who died attempting the same feat.
“I can’t imagine the isolation one feels in an environment like that. Not only the conditions are inclement but there’s nothing in sight. No perspective. You can’t see the tree on the horizon that you can get to tomorrow, or get to that mountain next week. It’s endless nothing. Not a branch or bush or insect or a plant. Nothing.” 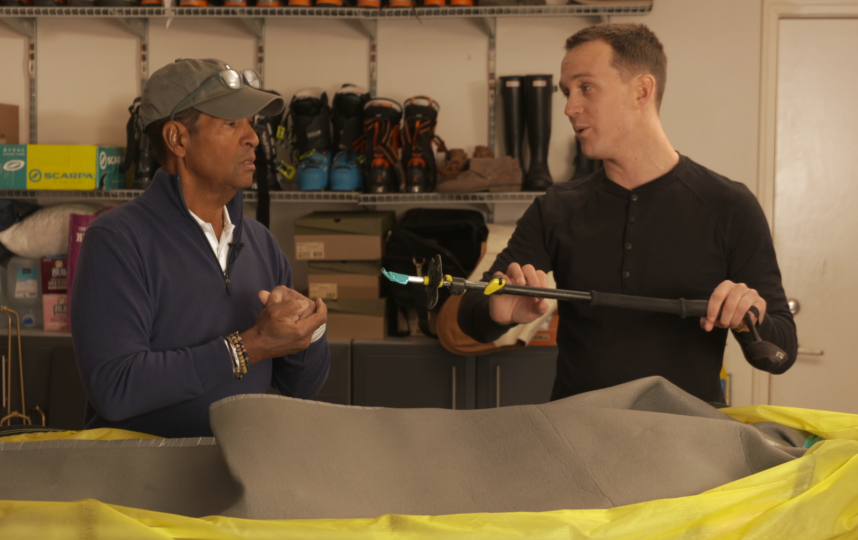 Q: Do you feel any sort of brotherhood with ESPN doing an “E:60” or “Outside The Lines” doing what they do? And can you appreciate more and more the fact you aren’t under the restrictions of a CBS, NBC or CBS as far as having more autonomy with your resources?
Gumbel: “I never look to the others. I just worry about our shop and our product. I’m happy our product is unique. We don’t, for example, use any music in our storytelling. We’re not trying to influence the viewer unnecessarily. We’re just telling the story with a serious bent and look at the sociological issues that are to often a forgotten part of sports. The job we do is different and unique.
“I give a lot credit to the folks at HBO. They have been kind and generous to me from the start when we conceptualized this and what we wanted to do. They never said: Don’t do this or don’t say this. There are probably some things that have cause them some consternation. Nobody has ever once said to back off something.”
Q: Such as the commentaries you have at the end of each show. Some you did years ago still resonate.
Gumbel: “In this climate they’re increasing difficult. As a monthly show, you have to be able to say something that won’t be dated by the time it airs and won’t make you look like a fool five days down the road. For example, as we sit here today, the two main stories in sports involve Robert Kraft and Zion Willamson. I can’t really say anything about them because I can’t see the future. Three days form now, Bob may say ‘I’ll fight this in court,’ or he could say, ‘I’m guilty and apologize.’ I have no idea and I’m not judging it. I’m saying unless you can see the future you can’t do a subject like that because it’ll be dated. So you wind up looking for things aren’t being said or need to be said. In such a crowded field it becomes increasingly difficult.”
Q: You don’t have the 24 hour news cycle as you record the show a day before it airs, and then it is repeated.
Gumbel: “The others have the platform or immediacy. If you say something Tuesday and it’s wrong you come back Wednesday and say something else. Or correct it. I don’t have that liberty.”

Q: You have done plenty of L.A.-centric stories over the years. The one last year with Rams head coach Sean McVay had you amazed about his photographic memory.
Gumbel: “He was such an unusual guy  — he would say is was so singularity focused. I feel bad he didn’t have his best day three weeks ago (in the Rams’ Super Bowl loss to New England). Still, I will forever blame him —  I had to sit in a hotel room in London to watch that (Super Bowl) at 3:40 in the morning and I had a plane to catch at 7 a.m. It wasn’t my favorite moment. He’s a good man and I liked him very much and willing to be different and try things.”

Also: A story the L.A. Times’ Steven Battaligo did with Gumbel on the topic of “Real Sports” in 2017.