The Top 30 sports shows of all time? From SportsCenter to Garbage Time, we helped shape this list … any objections are welcome

By Tom Hoffarth
When Barrett Sports Media floated the idea to mirror this week’s NBA Draft 30 choices with an exercise that might be entertaining in trying to identify and justify the best sports shows in TV’s existence, we had the time and an appreciation of the attempt to join in.
Jason Barrett even provided a list of about 70 shows that were acceptable, and the list was limited to studio shows: No scripted shows, docs, reality shows or sitcoms.
First, not everyone was asked, apparently:

This is a fun idea. My top four (all time):
1. CBS NFL Today, which basically created this genre
2. ESPN SportsCenter, which took the genre to a new level
3. TNT Inside the NBA, which redefined the genre
4. ESPN College Gameday, which is a machine.https://t.co/sselTzwP3z

John is as good as it gets in today’s sports media journalism field.
Ahem …
We were assigned the 24th pick, but we created our own Top 30 list to see how it could compare before hand. In order of the shows we felt carried the most importance, impact and created a legacy:
1. ABC’s “Wide World of Sports”
2. ESPN “Sports Center”
3. HBO’s “Real Sports”
4. TNT’s “Inside the NBA”
5. CBS’ “NFL Today”
6. ESPN’s “College GameDay”
7. ESPN’s “Up Close”
8. ESPN’s “Pardon The Interruption”
9. The syndicated “This Week in Baseball”
10. The Jim Rome array of shows from “Talk2” to the current “Jim Rome Show.”
The final BSM list is at this link.
Really. … Will Leitch took “Garbage Time” …
We wanted to add to the list, but …
* “Monday Night Football” in its initial version was really more of a sports variety show that happened to have a game attached to it. Where else do you get the halftime highlights idea spun into a SportsCenter format? 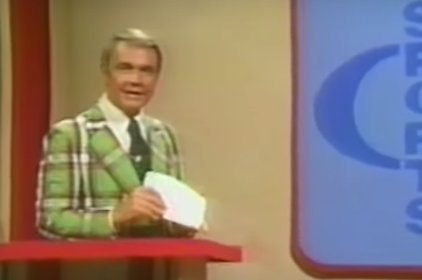 * We could not get enough of the Saturday airings of the Dick Enberg-hosted “Sports Challenge” and “The Way It Was,” but doubt many others didn’t remember this game show and a history lesson that spun off into a talk show.
* “The Superstars” on ABC … then “The Super Teams.” Glorious.
* “Battle of the Network Stars” anyone? Just a kid from the ’70s who wanted to see Adrienne Barbeau, Linda Carter and Farrah Fawcett get interviewed by Don Drysdale.
* We adored Chick Hearn on “Bowling For Dollars.” Wasn’t that something worth considering?
* Remember when Norman Chad and Jeff Cesario would sit in a theater and talk about an old sports movie that ran on ESPN Classic? Those were “Reel Classics.” Revive that immediately.

Whatever the verdict, here is the blurb we submitted at Pick No. 24, before it was edited down for space reasons:

On my personal Top 30 list, this Roy Firestone “Up Close” staple was No. 7, and I figured it would be long gone before my 24th pick. I was expecting, and actually hoping, to snag the Jim Rome franchise of shows – from “Talk2” in the early ‘90s all the way to “The Jim Rome Show” today, spanning ESPN2, ESPN, Fox Sports, ESPN again, CBS Sports Net and a stop in there on Showtime. Rome and I go way back to his San Diego radio days and I have a lot to document about his importance to the medium.
But there’s the rub: Rome was once a guest on “Up Close,” when his syndicated radio career was getting launched, because Firestone targeted him as a compelling guest. And even threw out a question about his late father that tried to make Rome do the quintessential “Firestone cry.”
Some quick history: “SportsLook” is the original title of the show that started in 1980 on the USA Network, then moved to ESPN as “Up Close,” with Firestone, a former sportscaster at the local CBS affiliate in L.A., as the host for 13 years. It was taped in L.A. so he had access to everyone coming and going. It was a simple premise: Firestone sits on the right, the guest is on the left, and they talk about all sorts of things about their sporting life. It relied on Firestone’s curiosity and research and what buttons to push.
Many tried to replicate the template to other shows with other hosts – there’s maybe no Bob Costas’ “On the Record” or even a version Rome was asked to launch with ESPN2 in the early ‘90s. It all connects to the importance of Firestone creating a trustworthy space to show emotions – important especially with strong male athletes – knowing Firestone would calmly talk you through it and expose a side of yourself that wasn’t readily available in pre-social media times.
If you need any sort of cultural reference, go to 1996’s “Jerry Maguire,” where Cameron Crowe knows enough to bring Roy Firestone as himself, with the “Up Close” set, and “interview” Rod Tidwell (Cuba Gooding Jr.) and create the climactic scene. Yes, Gooding won an Oscar for that. Assist to Firestone. Here’s the clip:

“Up Close” stayed for a couple of years after Firestone left – most notably, Chris Myers did a sit-down with O.J. Simpson in 1995 after his murder acquittal. The “O.J.: Made in America” Oscar-winning documentary included an interview Firestone did with Simpson on “Up Close” just two years before the murder that became an example of how the media had become so apologetic for Simpson’s previous domestic abuse charges. Chris Connelly took it over the show in the late ‘90s before he milked his own show out of it.
“SportsLook” and “Up Close” were so important that the L.A. 84 Amateur Athletic Foundation kept a videotaped library of every show for researchers to access. Take a tour of YouTube today to find the history and see people like Muhammad Ali, Pete Maravich … look ‘em up.
David J. Halberstam, the sports media historian, did a nice followup on with Firestone on his career, during a 2018 interview, that also best explains the importance of where this show started and what it begat.