The Return: Rocky Bleier, Vietnam, and a doc worthy of Oscar consideration

This is an extended piece from an item in the Aug. 19 edition of the Los Angeles Times:

Producer Jon Fish said he got a call about a month ago from ESPN execs to see if he could possibly speed up the editing process of his “SC Featured” documentary called “The Return,” based on former Pittsburgh Steelers running back and Army veteran Rocky Bleier agreeing to come revisit the Vietnam site where he was injured and earned a Purple Heart.

The network wanted to see if the piece could be entered into the L.A. Shorts International Film Festival last month. Fish obliged with a rough cut for the organization, without really knowing the ramifications.

Surprise: The festival not only requested a final version, but the 27-minute piece won Best Documentary.

Bigger surprise: That qualifies it to become eligible to be submitted to the Academy of Motion Picture of Arts and Sciences for best documentary short subject.

And by its airing Tuesday (ESPN2, 5 p.m. and 11:30 p.m.) in a slightly tighter version to accommodate a half-hour TV window, it also gets on the radar of the Sports Emmy Awards.

“To be honest, we didn’t know (about the Oscar eligibility) but it just worked out as far as timing,” said Fish, who came out for the festival screening on opening night with some 800 others at the Regal L.A. Live but left before the award was announced.

“Candidly, it was very cool with the red carpet and everything. We were lucky to have it screened there. It’s all happening organically, which is the best way it could happen.

“But all that aside, it’s an amazing honor just to be able to tell Rocky’s story, and that’s all that matters to me.”

Fish had been in an open conversation with Bleier for about 10 years to see if he would be interested in going back to Vietnam, and Bleier agreed last year, joined by ESPN reporter Tom Rinaldi and a small camera crew.

Bleier visited the Hiep Duc Valley rice paddy where he was part of a “Charlie Company” platoon that was ambushed came on the 49th anniversary of his injury, and results in Bleier weeping over the emotional experience of remembering colleagues who were killed.

Tuesday marks the event’s 50th anniversary, with Bleier making appearances on several ESPN programming to talk about the experience. 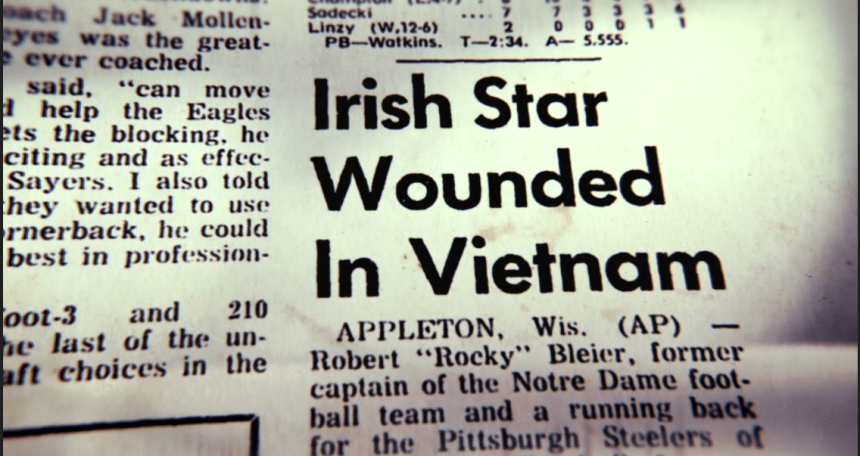 There are many more elements to telling this story worthy of passing on:
= A story in the Associated Press.
= A piece in The Athletic
= From the Pittsburgh Tribune-Review, as well as this one. It was picked up by Stars&Stripes.com
= From the Pittsburgh Post-Gazette
= Did you ever see the made-for-TV movie on Bleier’s life with Robert Urich in the starring role … and Art Carney as owner Art Rooney?