By Tom Hoffarth
Is this where ESPN suffers a mid-life crisis like the rest of us when we hit 40?
The network’s launch on Sept. 7, 1979 was likely before many today were even born. And they will remind us of that.
For us, it landed three months after our high school graduation and pretty much at the time college started. Right in our wheelhouse, right?
We didn’t get it. Literally, figuratively or whatever other way you want to frame it.
The network plans all sorts of ways to mark this ruby anniversary. One of them is a Sept. 10 episode of “E:60” where they found the first live event the network ever telecast — a professional slo-pitch softball game between the Kentucky Bourbons and the Milwaukee Schlitzes that aired that night, has not aired since, and the video that somehow had gone missing was recently found.
As we celebrate the 20th anniversary of our 20th high school reunion, and try to remember what really was the most compelling sports shows of 1979 — and incredulous at how Fran Tarkenton got to be a co-host of “That’s Incredible!” — this is an opportunity to list the 40 things that pop into our head about ESPN’s run to this point.

1.  Australian Rules Football playing on the TV sets of our favorite Hermosa Beach tavern. And people watching. It’s still on somewhere, somehow.
2.  The time someone rummaging around the MGM library finds the black-and-white “Home Run Derby” from the 1950s, staged at the old Wrigley Field in L.A.,  and ESPN airs them in the late 1980s. We go to the ’89 MLB All-Star Game in Anaheim and aske Ernie Banks and Eddie Matthews that they remember about doing that show. “I liked Mark Scott, he was a nice man,” said Banks. “Eddie, you remember Mark Scott?” “Why should I remember him?” said Matthews. “I never hear from him.” Banks responded: “Oh, he’s dead.”
3.  Tom Mees, RIP
4.  The video of Jim Valvano’s ESPY speech. May it never RIP.
5.  LeBron James, Jim Gray, “The Decision,” 2010. ESPN ombudsman Don Ohlmeyer calls it “a metaphor for what ails the media today.”
6. One episode of “Barstool Sports” airs. Then it doesn’t.
7. “The Playmakers,” 11 episodes of a soap opera on a fictional pro football team, launches in 2003. NFL commissioner Paul Tagliabue complains to Disney chief Michael Eisner. “Nobody charts our programming future but us,” says ESPN executive Mark Shapiro said, who circles back after the announcement of no second season: “(It would only be) rubbing it into the faces of our most important client.” It’s then offered it up as a boxed DVD set for $49.95.
8. An awkward exit in 2013 of a collaborative effort with PBS’ “Frontline” to produce a multi-platform documentary called “League of Denial,” probing scandalous research on the long-term effects of NFL concussions. ESPN’s Vince Doria says:  “It is an easy enough story if you wanted to connect some dots to it and say, ‘Look, they kowtowed to the NFL.’ But if you looked slightly further, and look at what the on‑air product was and what we delivered and the volume of what we delivered, the platforms over which we delivered it and so forth, show me somebody else that comes anywhere near giving that kind of exposure to the concussion issue as it relates to the NFL. I don’t think there is anybody.”
9. Al Michaels refers to the talking-head/debate-rage shows — particularly “Around The Horn” — as “gasbags on parade.”
10. Jay Mariotti 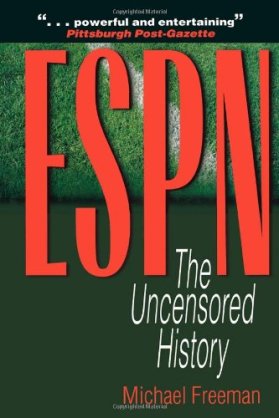 11. “ESPN: The Uncensored History,” by the New York Times’ Michael Freeman, 340 pages in 2001. “Part corporate history, part media and cultural analysis, and part expose,” says the PR blurb, “the book examines both the positive developments effected by the network and the bad habits it has picked up from the business it covers.” Stuff like sexual harassment, and things that happen when you’re secluded in Bristol, Conn.
12. Tony Kornheiser serves a two-week suspension from “Pardon the Interruption” for saying, on his radio show, that colleague Hannah Storm wore an outfit that was “horrifying” and added she looked “like she has sausage casing wrapping around her upper body.”
13. Brent Musburger, calling the 2013 BCS title game between Alabama and Notre Dame,  spots Katherine Webb on the monitor.
14. Pam Ward gets to do a college football play-by-play gig. In 2000. Oh, the handwringing.
15.  Beth Mowins gets to do a college football game, then “Monday Night Football” in 2017. Oh, the handwringing.
16.  Sergio Dipp gets to a “Monday Night Football” B-team sideline gig. Oh, dear.
17.  The Jon Miller-Joe Morgan run on “Sunday Night Baseball. (And the emergence/value of FireJoeMorgan.com)
18.  Curt Schilling gets to do “Sunday Night Baseball”?
19.  Jessica Mendoza gets to do “Sunday Night Baseball.”
20.  Lance Armstrong has the balls to do a monologue at the ESPY Awards in ’06 that drops a few anal and testical jokes. Hardy har har. 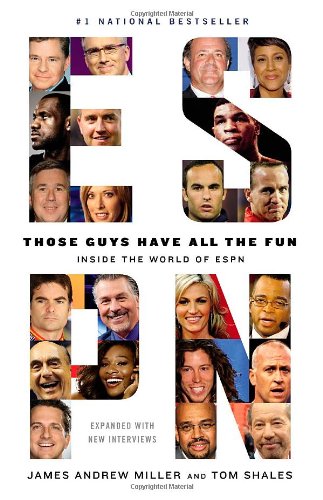 21. “Those Guys Have All The Fun: Inside the World of ESPN,” by James Andrew Miller and Tom Shales, 763 pages dropping in 2011. Including Dick Vitale’s blurb on the back cover: “He says, ‘I’m with a new network called ESPN,’ and I swear I said something to the effect like, ‘That sounds like a disease.'”
22. Howie Schwab, laid off after 26 years? “I am extremely disappointed to say farewell,” he writes on Facebook. “I always did everything asked of me and more. What did I get in return today … word that I should get lost. The only thing that mattered was my salary, which in my view was the lone reason I lost my job.”
23. Norman Chad and Jeff Cesario overlap as hosts of ESPN Classic’s “Real Classics” Sunday night movie show in 2001. Chad discovers it’s in the cards for him to move on.
24. The first “30 For 30” episode in 2009: “Kings Ramsom,” as Peter Berg goes back to the day Wayne Gretzky was traded to the Kings.
25. Episode nine of “30 For 30” in 2010: “Guru of Go,” on basketball coach Paul Westhead’s run at Loyola Marymount.
26. Episode 14 of “30 For 30” in 2010: “Straight Outta L.A.,” on Ice Cube and the relationship the Los Angeles Raiders had with their fan base for 13 seasons.
27. The 2011 documentary, “The Marinovich Project,” on Todd Marinovich’s relationship with his dad, the game, and his life, by Andrew Stephan and John Dorsey.
28. ESPN buys the Classic Sports Network, makes it ESPN Classic, then essentially buries it on cable menus.
29. Erin Andrews checks out. Bigger job awaits on Fox. It’s just as well.
30. Michele Beadle’s role diminishes at ESPN. It’s just as well. 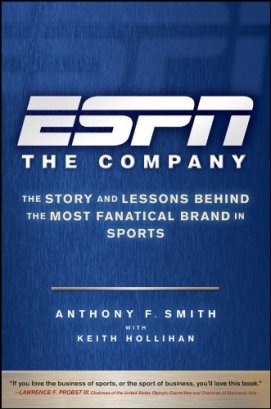 31. “ESPN The Company: The Story and Lessons Behind the Most Fanatical Brand in Sports,” by Anthony F. Smith, 216 pages in 2009.
32. OK, sure, John Skipper had to leave because of an extortion threat from his cocaine dealer. George Bodenheimer should never have been allowed to leave.
33. Keith Olbermann and Dan Patrick, and the chemistry that couldn’t be replicated.
34. Craig Kilborn’s decision to ditch “SportsCenter” to try his hand at a new Comedy Central series “The Daily Show.” It really takes off. After he leaves and Jon Stewart takes over.
35. Bob Ley’s class.
36. Holly Rowe’s courage.
37. Live coverage begins of the Coney Island Hot Dog Eating Contest on July 4, 2004. Gary Miller has to cover the first one. Adam Amin now has to do it.
38. A new, impressive city-block wide ESPN studio lands across the street from Staples Center in 2014, signaling recognition that the West Coast does matter to some extent.
39. There will be a “SportsCenter” studio in a hotel on the Las Vegas Strip in 2020.
40. It’s the 1980-81 season. About midnight. Leaving Firestone Fieldhouse on the Pepperdine campus after covering a Waves’ basketball game against visiting USF. Winding down that narrow road toward Pacific Coast Highway and stuck behind an 18 wheeler with the large ESPN logo on the side try to navigate the turns. My thought:  Why would they bother coming all the way out here? Who actually saw that game on that cable channel unless they have one of those dish things on their roof or have cable TV — which, as far as I know, very few do. Does this make any sense?