Let’s (Long Beach) Post up: The power of the Pyramid at 25 years young

By Tom Hoffarth/Steve Lowery
Our latest for the Long Beach Post sizes up how far the Long Beach State campus Walter Pyramid has come a quarter century after its open — a Top 25 list of events we’ve decided to rank based on hindsight and proper context.
(With apologies to Kobe Bryant, slipping from No. 1 to No. 2 based on how this really has to be a Long Beach State-heavy-duty list).
Considering how many centuries other pyramids have survived, it has a lot of history to catch up on. 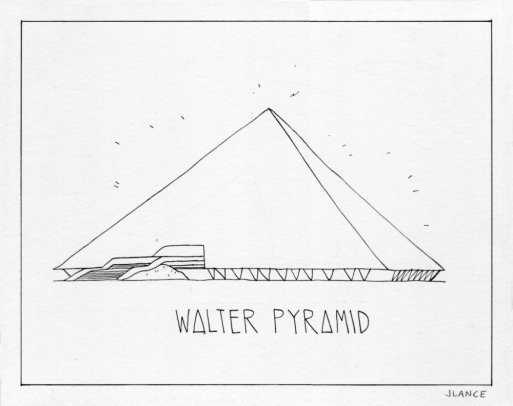 As an inspiration for artistic interpretation, illustrator Jordan Lance, who graduated from the CSULB art program in 2015, feels it belongs with a series he was once commissioned to do on city’s prominent touchstones along with the Breakers Hotel, Villa Riviera, the International Tower and the Queen Mary. 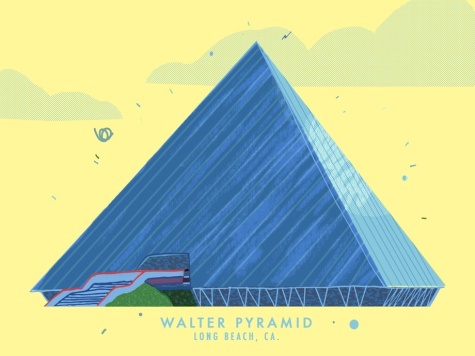 “I know the Walter Pyramid well from my long walk from lower campus parking to the upper campus where all the art building are located,” Lance says.
“I think it’s a great symbol for such a unique place as Long Beach. Of course, the other landmarks are great because they also feel incorporated into the city’s character as buildings people know and encounter every day and have affinity for beyond just their architectural qualities.
“But I’ve lived and worked in Long Beach for a long time and felt happy to include it in a city I was born in and call home.” 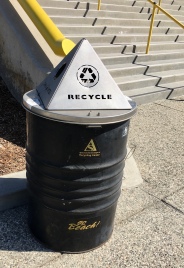 It’s not just a recycling bin. It’s one shaped like a pyramid, of course.

Other comparable “true” pyramid-style structures in the U.S.:
= Pyramid Arena in Memphis, Tenn., former home University of Memphis, from 1991 to 2004. The NBA’s Grizzles were to play in it but it needed significant upgrades after a flood. Reopened in 2015 as a Bass Pro Shops megastore. It stands 321 feet on each side.
= The Luxor Hotel in Las Vegas opened in 1993. Includes inclined elevators that travel at a 39-degree angle. It stands 350 feet on each side.
= The San Diego Innovation Center opened in 1992 (cost: $45 million) as a six-story glass office building 150-feet high