Profound sadness and bittersweet hope filtered through song and testimony during the recent Kobe and Gianna Bryant Celebration of Life event at Staples Center.

Yet as they experienced all  that firsthand, a group of students, coaches, and faculty at Bishop Mora Salesian High School harnessed that energy to propel its boys basketball team on a historic run.

Some 50 members of the Salesian basketball family were invited to attend the Bryant memorial on Feb. 24, a fruit of the relationship forged by the college-prep school of some 400 boys with Lakers executive Tim Harris, the team’s chief operating officer and senior vice president of business operations.

The inspiration the group of boys took away from the memorial is something team members are crediting with uniting their focus on the basketball court: the small but defensive-minded roster captured the CIF-Southern Section 3AA championship on Feb. 29, four days after the memorial. It’s the first title in the 60-plus-year history of the East L.A. school just minutes away from Staples Center.

Here’s more from our story in Angelus News.

A sign of the (L.A.) Times: USC’s women hoops from the ’80s resonates as a history lesson in HBO doc — and Doris Burke swears by it

By Tom Hoffarth
Cheryl Miller was, by all measurements, the greatest women’s basketball player. Not just in her time — the 1980s with USC — but for all time.

Skillful, explosive, matching it all with a bit of a showboating display she never ran from.
In all estimates, she was …

“She was a bad … mother … fucker,” says Doris Burke at one point in the new HBO documentary “Women of Troy.”

We include the quote not for shock effect. It seems there are some who can handle the language, and others who care to change it, or alter it, so that the meaning is diluted.

Our latest piece for the Los Angeles Times goes over the HBO doc and what makes it a compelling watch. END_OF_DOCUMENT_TOKEN_TO_BE_REPLACED

Remembering Hank Gathers: A statue at LMU 30 years later, and the force of nature returns … along with the tears

It was just a moment. It came after the blousy material dropped to reveal a statue of basketball legend Hank Gathers, located just outside of Loyola Marymount’s Gersten Pavilion Feb. 29. It came after the faintest beat of a gasp was immediately followed by applause and cheers, broad smiles and — this being 2020 — selfies.

Still, there was a moment when, Chris Knight said, amid the laughter and hugs he shared with former teammates who played with Gathers, that he suddenly, in a fleeting space of silence, “could hear Hank’s mother crying above it all.”

For Angelus News, Steve Lowery walks us through the moment when the Gathers statue was unveiled 30 years after his death on the court, right before Easter, and the incredible run the Lions went on with the NCAA Tournament in his honor.

This is a tearjerker and breaks your heart all over again.

The side of Kobe Bryant you may not know about 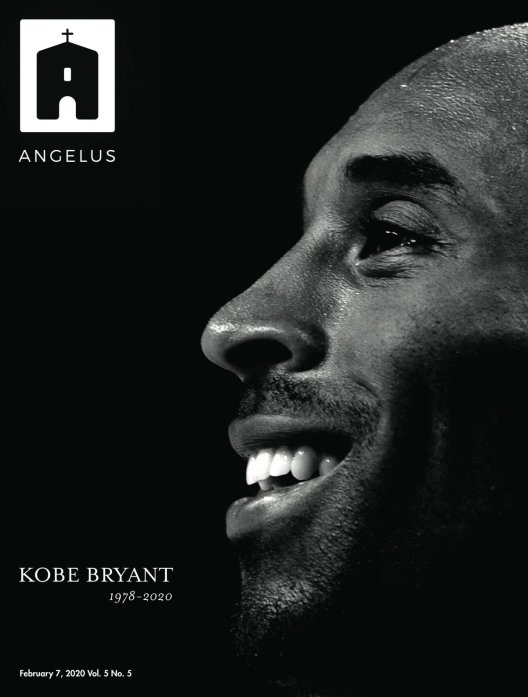 Tom Hoffarth and Steve Lowery worked hours together last week, with editor Pablo Kay in Rome, not long after reports about a helicopter crash in Calabasas, to produce this cover story for the Feb. 7 edition of Angelus News.

Bryant took his Catholic faith serious. He was at his home parish, Our Lady Queen of Angels Church in Newport Beach hours before he left from John Wayne Airport in the final trip to a youth basketball game in Thousand Oaks.

In 2001, Bryant married his wife, Vanessa, herself a Catholic, at St. Edward the Confessor Church in Dana Point. Father Sallot at OLQA said that he and Kobe had chatted about his desire to receive the sacrament of confirmation in the future.

We try not to judge, but report the facts.

RIP, Kobe, Gianna and all their friends, parents, coaches and families.

A fan I talked to: “Kobe was the GOAT (greatest of all time) right? There is the bible verse about how some day we will be separated, sheep from goats … But Kobe was the GOAT … may be they will have make a special case for him.” https://t.co/47fNLKuS7q

A sign of the (L.A.) Times: Covering Kobe Bryant, and what the media does following a TMZ lead

By Tom Hoffarth
Jim Hill rushed into the KCBS-Channel 2 studio in suit and tie and had Magic Johnson on the phone while other local TV crews were scrambling to do fan-on-the-street reactions. That was impressive but not unexpected.
Liz Habib’s voice cracked before she had to stop and wipe away tears, abandoning a KTTV-Channel 11 live standup. That felt appropriate.
ESPN and ABC continued to televise the NFL’s Pro Bowl in a simulcast, a meaningless exercise, while pushing its live coverage of events to ESPN2. That was beyond awkward, bordering on disrespectful.
Media outlets trying to disseminate what TMZ first reported Sunday morning as a helicopter crash in Calabasas that took five lives, including that of retired Lakers star Kobe Bryant, ignited the comprehension, disbelief and misinformation anxiety that often permeate the first 24 hours of a news cycle.
More in our weekly Los Angeles Times piece here…

Also:
== Margaret Sullivan of the Washington Post: “If the media world were ruled by thoughtfulness, rigor and ethics, TMZ wouldn’t have broken the news about Sunday’s helicopter crash that killed Kobe Bryant, his daughter and seven others before all the families were notified.”

Our latest L.A. Times sports media piece focused on the 20 things that would be nice to occur in 2020.
What we edited out:
== KABC-Channel 7 sportscaster Ashley Brewer finds a fulfilling role on the next incarnation of “Wheel of Fortune.”
== SportsNet L.A.’s Alana Rizzo comes to the realization she isn’t a reporter. She just plays one on TV.
== With all due respect to our elders, a moratorium on getting “Steinered.”
Here is the rest of what got in. And if Bill Walton wants to eat peanut butter while he’s on NBC’s Olympics telecast, all the better.

Rain has been the pain of  issues at the track for the last 12 months, and is the reason why we felt it was necessary to look into how the thoroughbred race track planned to stay in business with our latest piece for the Los Angeles Business Journal, now on newstands, and also at this link. END_OF_DOCUMENT_TOKEN_TO_BE_REPLACED