What if we told you there was a pro football league that existed more than 30 years ago, contrived as a complimentary spring exercise to the NFL’s fall season, but then one owner in particular based in New York couldn’t help himself, drove it off the cliff at the expense of his supposed business partners, and later would be doing the same things in the White House.
Egads.
We could also tell you this particular story was already an ESPN original “30 For 30” doc  called “Small Potatoes: Who Killed the USFL.” 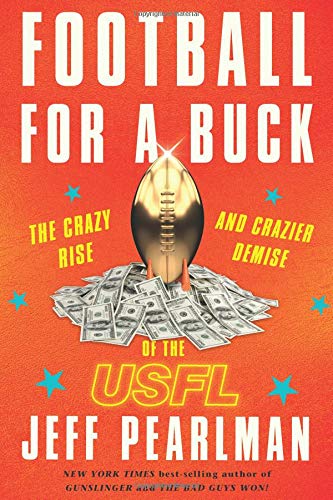 Nevertheless, we booked Jeff Pearlman on  TheDrillLA.com vodcast based on his book: “Football For A Buck: The Crazy Rise and Crazier Demise of the USFL.”
Crazy, sure. It’s been discussed on shows as diverse as NPR to ESPN’s “Outside The Lines”.  From NESN to the Peter King podcast ...
From FS1’s Colin Cowherd to DirecTV Audience Network show host Rick Eisen. Plus, it has been featured in Forbes and The Christian Science Monitor, and The Associated Press Sports podcast.
We have a different spin.
A true spiral.
One inspired by a left-handed Mormon who made the Los Angeles Express something we still look fondly back on.
The Southern California-based Pearlman, the former Sports Illustrated writer now working for The Athletic who did the incredible Lakers’ book “Showtime: Magic, Kareem, Riley, and the Los Angeles Lakers Dynasty of the 1980s“ in 2014, carves out some time here to spend with us.
More context: Chris Dufresne of TMG Media Sports.com, which focuses on college football coverage, was the Los Angeles Times beat writer for the L.A. Express starting with their 1982 birth up until the final courtroom drama that ended with a jury agreeing that the NFL did in fact monopolize pro football, but the USFL was owed just one dollar in damages.
Add to this: Tom Hoffarth covered the Express for several years as well for the South Bay Daily Breeze.
And … Steve Lowery and Steve Vanderpool were part of the Express public relations team and knew all the ins and outs of what went on in the offices.
They got the band back together.
Here is an hour of discussion that Pearlman said in a parting Twitter DM that “was preposterously fun” to do … hope he has the same feeling after watching it here (and where in the world is Bob Rose these days?):

In 2013, Pearlman prepped us by writing this for Sports Illustrated.
And here’s more on Pearlman’s website linked here.
And an excerpt here on Bleacher Report.