Rain has been the pain of  issues at the track for the last 12 months, and is the reason why we felt it was necessary to look into how the thoroughbred race track planned to stay in business with our latest piece for the Los Angeles Business Journal, now on newstands, and also at this link. END_OF_DOCUMENT_TOKEN_TO_BE_REPLACED

A deeper slice of Adam Sandler and ‘Uncut Gems’ … and a Kobe Bryant connection?

There’s far more to spin from our latest Los Angeles Times sports media column, the monthly Sports Media Misery Index where we lead off with some perspective on the new Adam Sandler film “Uncut Gems,” already out in L.A. and New York with a national release on Christmas Day. 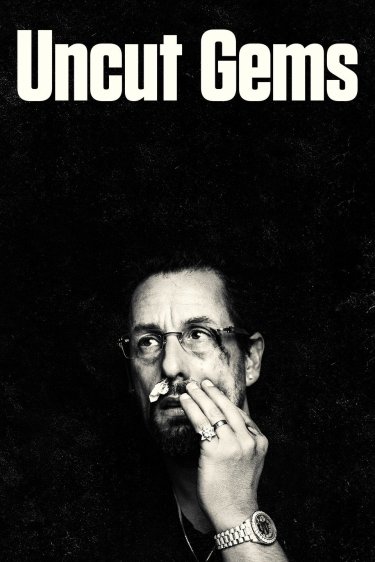 Directors/writers Josh and Benny Safdie admit they never thought they’d allow an actual Celtics player to be in their project — but Kevin Garnett has a major role.

Their goal from the start was to have a player from their beloved Knicks, Amare Stoudamire, play the NBA star role. Not at all a cameo role.

Some media reports mention that Kobe Bryant was originally attached to this script.

From our conversation with the Safdie brothers: When they were shaping the script in 2010, their agents at WME suggested they aim big when it came to casting an NBA star to fill the key role in their story. Conveniently, Bryant was also a WME client.

“The way it works is, they throw out names (as suggestions for the film),” said Benny  Safdie. “But that’s a different way of how we work. When we’re writing the script, we find out – this is the person who wants the role, and we’ll spend a ton of time making it just for them, then hand it to them.”

END_OF_DOCUMENT_TOKEN_TO_BE_REPLACED

The 2019 holiday sports book guide: We’ve got more good reads if you’ve got the time

By Tom Hoffarth
We managed to get in about a half-dozen titles in our holiday season Los Angeles Times’ media piece. But there are, of course, more worthy of consideration:

== “The Greatest Upset Never Seen: Virginia, Chaminade and the Game That Changed College Basketball,” by Jack Danilewicz (University of Nebraska Press, 232 pages, $27.95)
As we watched UCLA’s recent trip to the Maui Classic, which found them in a 22-22 tie with Chaminade early in the second half, we couldn’t help but think: Wonder if anyone remembers the time when …
Seems our memory was a bit fuzzy as well.
We were in college ourselves and heard about No. 1 Virginia getting taken down 77-72 by this tiny NAIA Catholic school right before Christmas, 1982. We had always thought it was in the Maui Tournament (or the Hawaii Rainbow Tournament as it was called), but it wasn’t — Ralph Sampson’s Cavaliers were coming back on a stop in Hawaii after a trip to Japan for this one-and-done deal. It became a global story at a time when we had to wait for the news to catch up to us as the game ended past 3 a.m. on the East Coast and wasn’t televised.
Now, it’s more than a Wikipedia entry. END_OF_DOCUMENT_TOKEN_TO_BE_REPLACED

Let’s (Long Beach) Post up: The power of the Pyramid at 25 years young

By Tom Hoffarth/Steve Lowery
Our latest for the Long Beach Post sizes up how far the Long Beach State campus Walter Pyramid has come a quarter century after its open — a Top 25 list of events we’ve decided to rank based on hindsight and proper context.
(With apologies to Kobe Bryant, slipping from No. 1 to No. 2 based on how this really has to be a Long Beach State-heavy-duty list).
Considering how many centuries other pyramids have survived, it has a lot of history to catch up on.

As an inspiration for artistic interpretation, illustrator Jordan Lance, who graduated from the CSULB art program in 2015, feels it belongs with a series he was once commissioned to do on city’s prominent touchstones along with the Breakers Hotel, Villa Riviera, the International Tower and the Queen Mary. END_OF_DOCUMENT_TOKEN_TO_BE_REPLACED

By Tom Hoffarth
Our latest sports media piece for the Los Angeles Times has our consernational compass pointed at Stephen A. Smith and ESPN’s plans to keep him gainfully employed, Jessica Mendoza’s confusion over a gray area in what kind of access she can get as an ESPN employee, stories that try to keep normalizing gambling, and a new Lindsey Vonn HBO documentary.
And one more thing while we’re thinking about it:
* If you’re going to be honest in advertising, David Feherty’s “Brilliantly Stupid Not So Special Year End Special” (Golf Channel, Tuesday, 6 p.m. with several replays) does a swell job when compared to other programming on the network that has one believing his golf game will actually improve by investing an hour into an infomercial/how to improve your short game.

A SIGN OF THE (L.A.) TIMES: WHEN ‘FORD V FERRARI’ SPINS AWAY FROM HOLLYWOOD’S FAST-N-FURIOUS WAYS OF DEALING FACT VS. FICTION

As the cover story for the March 25, 1957 edition of  Sports Illustrated, Carroll Shelby is called “The Gentle Leadfoot,” and referred to as “America’s hottest driver” as he headed into a big race at Sebring.

“You know, when I’m driving a race car I feel like I don’t have a problem in the world,” Shelby says in the piece. “I haven’t even tried to analyze why I do it. I guess there is just something there — a certain challenge.”
All the while, he wore these bibbed, striped carpenters’ overalls he says he bought for $3 at J.C.Penney’s “when I was in the chicken business.”
The beauty of the story is writer Kenneth Rudeen allows Shelby to talk through most of it, in his voice. That’s part of the Shelby sales pitch charm, playing up his Texas-bred stereotypes that followed him to a car designer, salesman and legend.

(Just for some context in that 1957 SI issue, the magazine also has a piece about the new Major League Baseball rookies who were likely to do well in the upcoming season. That included Baltimore’s Brooks Robinson and Cleveland’s Roger Maris. In its preview of the NCAA basketball final four — Kansas, San Francisco, North Carolina and Michigan State — there’s a story about how Kansas sophomore Wilt Chamberlain has become a “magnetic obsession.”)

In an expansion of our piece in Monday’s Los Angeles Times about how the new box-office hit “Ford v Ferrari” has been viewed by those who like to separate fact from fiction — it is a “based on a true story” about how Shelby and driver Ken Miles battled with Ford executives trying to beat Ferrari at the coveted 24 Hours of Le Mans in the 1960s, finally coming through at the end of the decade with four straight wins — we had a conversation with Shelby’s 48-year-old grandson, Aaron, about this. END_OF_DOCUMENT_TOKEN_TO_BE_REPLACED

A SIGN OF THE (L.A.) TIMES: WAS NOAH EAGLE BORN TO BE AN NBA BROADCASTER? THE CLIPPERS HAVE A NEST FOR HIM TO PROVE IT

Was Noah Eagle born to be an NBA play-by-play man?

On the date of his birth — Dec. 11, 1996 — his father, Ian, was there in the hospital that morning. But his load management (OK, it wasn’t a thing then) called for him to call another New Jersey Nets game that night.

The 4-11 Nets were up against the 16-6 Seattle SuperSonics, George Karl’s team with Gary Payton, Shawn Kemp, Sam Perkins and Detlef Schrempf. The Nets were trying to find their way with coach John Calipari’s roster of Kerry Kittles, Robert Pack, Kendall Gill and Shawn Bradley, and Ed O’Bannon off the bench.

The Nets kind of surprised the Sonics by pinning a 110-101 loss on them. 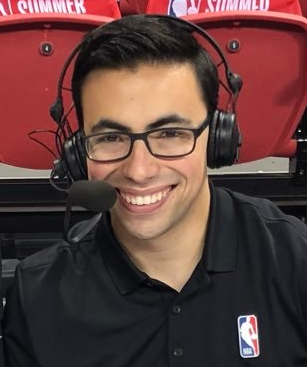 Noah Eagle can tell you about that game as if he was there, he knows it so well. And it has shaped his career path to calling games now for the Clippers.

“I believe I’ve basically studied the NBA since Day 1 on this Earth,” he says. “From that day, the NBA has been my biggest love. Movies, TV and music are right behind it. It’s all about finding a way to show I know the history of the game and pop culture and staying current. If I can blend it and be creative, that’s what I’ll do.”

The Clippers’ 22-year-old radio play-by-play man is our weekly L.A. Times media column profile. In the process of pulling this piece together, we’ve got our writers’ cut of notes, quotes and more antidotes worth passing on to add more context.

(But first, check out this clip below: On Feb. 17, 2018, Ian and Noah Eagle were both calling a Syracuse-Miami college basketball game — Ian for CBS; Noah, a junior at Syracuse, doing it for the school’s WAER-FM radio station. They met up for a pre-game segment.) END_OF_DOCUMENT_TOKEN_TO_BE_REPLACED

A sign of the (L.A.) Times: Santa Anita took all precaution to avoid catastrophe. Then the final race of the Breeders’ Cup happened

A week before the 36th Breeders Cup took place at Santa Anita Race Track, we focused our sports media piece in the Los Angeles Times on how NBC would approach the recent history of calamity resulting in 36 thoroughbred deaths since last December.

After a Tuesday’s conference call with reporters, NBC allowed handicapper Randy Moss to add to the discussion:  “I know the eyes of the world are on Santa Anita and are on the Breeders’ Cup, and it’s obviously critically important for the Breeders’ Cup that they get through this weekend without an incident, but an incident-free weekend doesn’t necessarily mean that the reforms are working, and an injury this weekend doesn’t necessarily mean that the reforms aren’t working.”

Our followup story posted on how NBC covered the injury suffered by Mongolian Groom near the end of the Breeders’ Cup Classic — the horse was euthanized, but the announcement didn’t come until about two hours after NBC went off the air — is open for further interpretation. No matter how much NBC reporters may have prepared viewers for this possibility, when it did happen, it was still quite unnerving.